The Best Cities for Public Transportation

That adds up to a whopping 9.9 billion trips per year. And why not? Beyond the obvious savings of traveling by bus, train, trolley or metro â both financial and environmental â leaving the driving to someone else allows you to kick back and text, read, work, or snooze to your heart’s content. And let’s be honest, road rage is for suckers.

If you’re one of us in-the-know commuters, you’re going to want to check out our list of the best cities in America for public transportation.

Takeaways about the best cities for public transportation

You’re used to looking at route maps, right? Yeah, we know. This is why we created this interactive map to highlight the top 150 cities for public transportation. Can you guess which cities made our top 10? You’re probably not too far off.

These are the 10 best cities for public transportation

The best cities for public transportation are mostly urban centers with fantastic infrastructure. So, don’t expect to see a âcity” like Des Moines make the cut.

And while the East Coast may have the slightest overall edge, you’ll find at least a couple of cities in every major region of the country represented here. Read on to find out which U.S. cities are the best for public transportation. 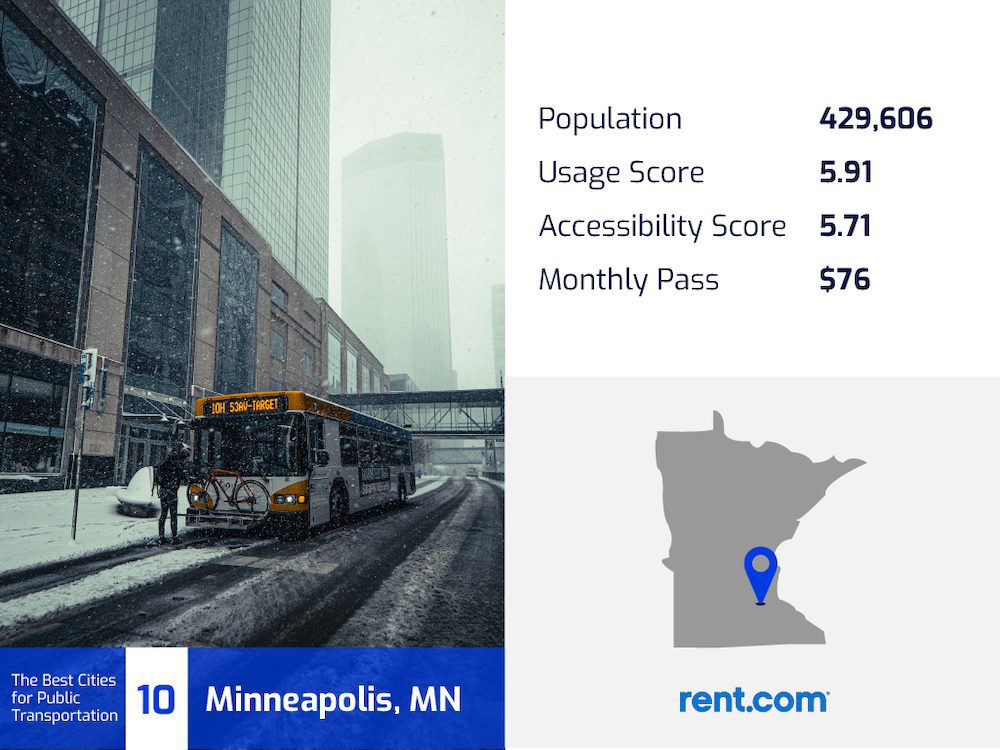 Minneapolis is serious about keeping its citizens warm and comfortable. Take, for example, the Minneapolis Skyway, a 9.5-mile network of enclosed heated walkways. And while that makes traveling on foot a breeze â even in the dead of winter â sometimes, you need to travel farther than your own two feet will take you.

And for those trips, there’s the METRO light-rail, along with 18 bus lines to choose from, including fare-free âFree Ride” buses you can hop on along Nicollet Mall.

Even for the rides that aren’t free, your public transportation budget will go far in Minneapolis â the second cheapest city in our top 10 for transport (monthly unlimited).

Think living in this half of the Twin Cities is your speed? Get the scoop on the best neighborhoods in Minneapolis, find an apartment and stock up on some serious winter wear. 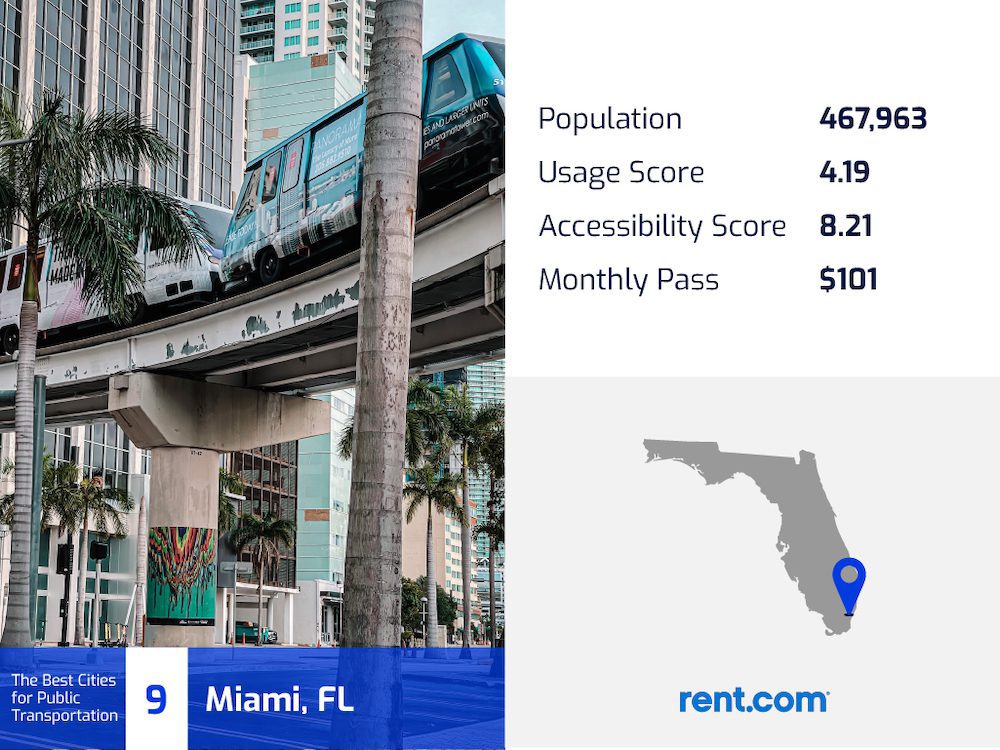 Is Minneapolis too chilly (OK, frigid) for your taste? Perhaps you should consider the opposite tip of the country. Down in Miami, the vibe is endless sunshine and permanent vacation mode. And while traffic is no joke (understatement), public transportation is a stress-free way to get around the city.

First, you’ve got the charming free trolleys, which come every 15 minutes. If no-charge sounds pretty good, you’ll also love the Metromover, which you can pick up in Brickell or Downtown. Trying to get down to Coral Gables, Coconut Grove or South Miami? Hop on the Metrorail. And for getting around Miami Beach, the bus is your best option. Get up to speed on everything you need to know about living in Miami and start searching for your South Florida apartment. 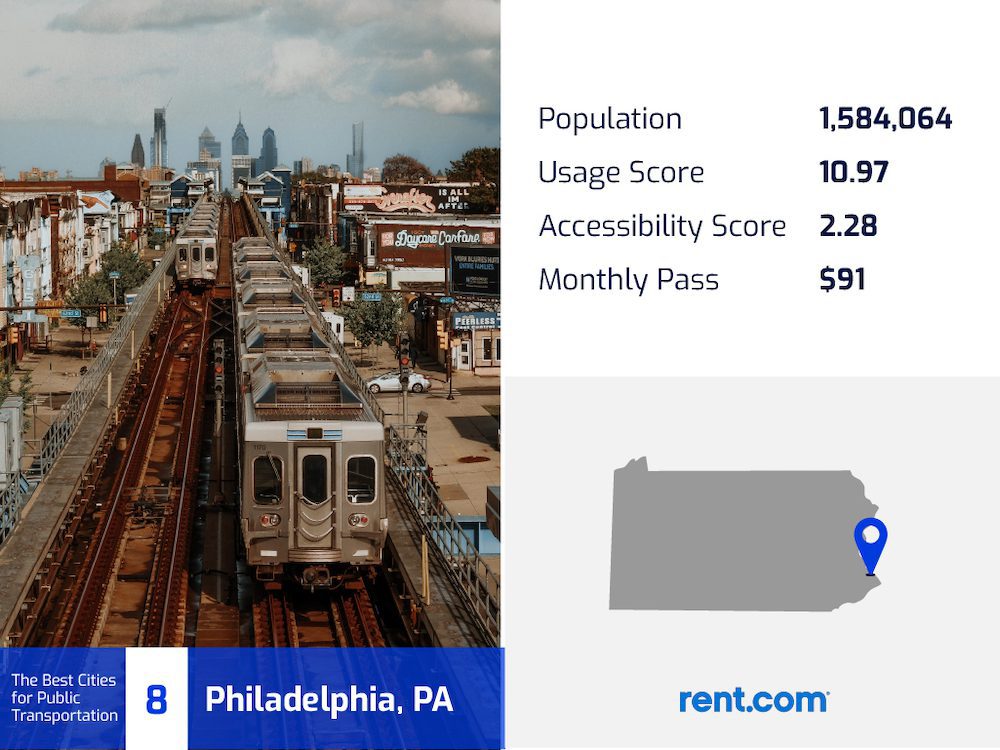 Living in Philly gives you all the East Coast arts, culture, education and sports you can handle â without the N.Y.C. price tag. You get a lot more bang for your buck in Philadelphia, and you’ll still find a public transportation system that rivals that of the Big Apple.

The Southeast Pennsylvania Transportation Authority (SEPTA) is the country’s sixth-largest public transit system. More than 1.3 million people ride SEPTA’s train, subway, trolley and bus lines every day. The extensive system makes it simple and convenient to explore all that both Philadelphia and the surrounding areas have to offer. 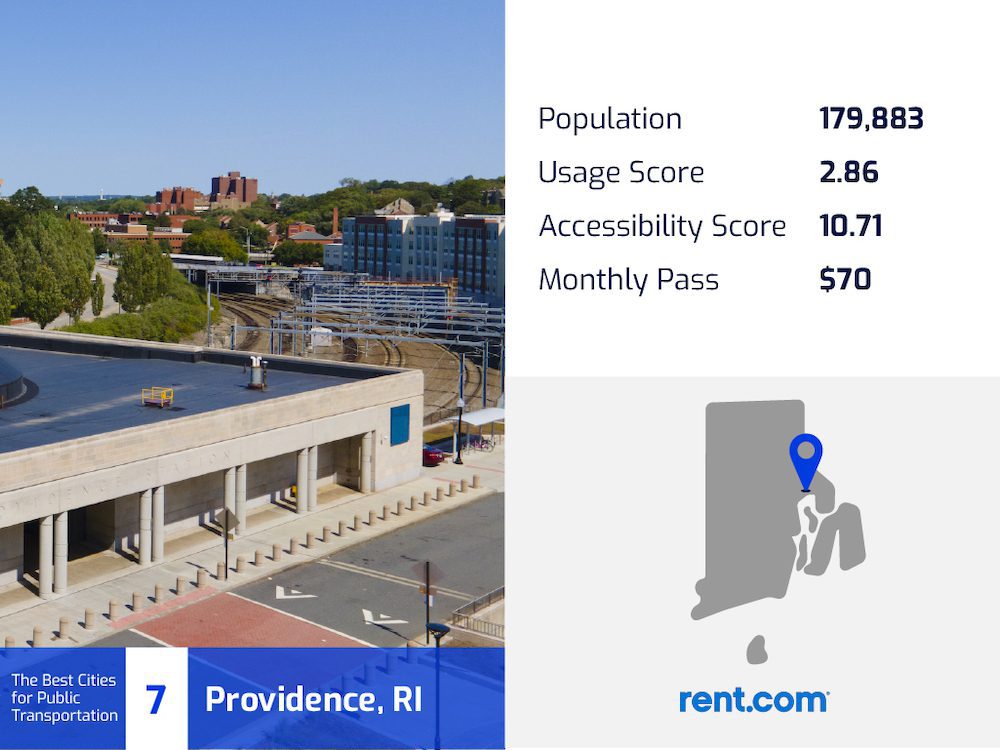 If you live in Providence, you’ll enjoy the cheapest price for a monthly unlimited travel pass among our top 10. The capital of our nation’s smallest state is home to Brown University and the Rhode Island School of Design. Getting around town is a breeze for co-eds, commuters and everyone in-between.

The Rhode Island Public Transit Authority (RIPTA) provides low-cost bus and trolley services around the city. In the summer, there are even routes to the beach. Better yet, all of the buses have bike racks so you can explore Rhode Island on two wheels. And if you want to really soak up the scenery, take the hour-long ferry ride from Providence to Newport.

Plus, Providence is a stop on one of the Massachusetts Bay Transportation Authority’s (MBTA) commuter rail lines, so you can get to Boston in just over an hour. 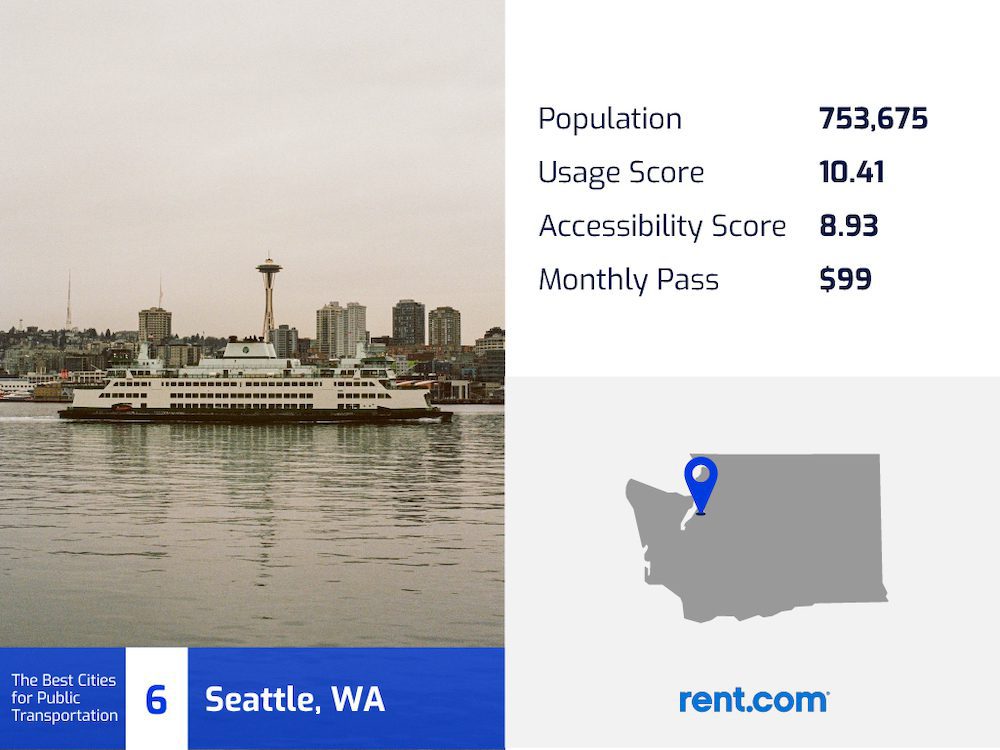 Have you ever gazed out over the Puget Sound at the majestic Cascade Mountains on one of those magical sunny days in Seattle? It’s the kind of scene you don’t soon forget. And while those sunny days are somewhat rare, there’s a lot to love about living in Seattle, from the coffee culture to the ease of getting around on the fantastic public transportation system.

Grab an ORCA card and hop on the city’s easy-to-navigate streetcars, light rail and busses. Not only are there ferries from which to soak up those amazing views, but Seattle also boasts a monorail. Considering a move to Emerald City? Scope out the best neighborhoods in Seattle, then start searching for a place to live. 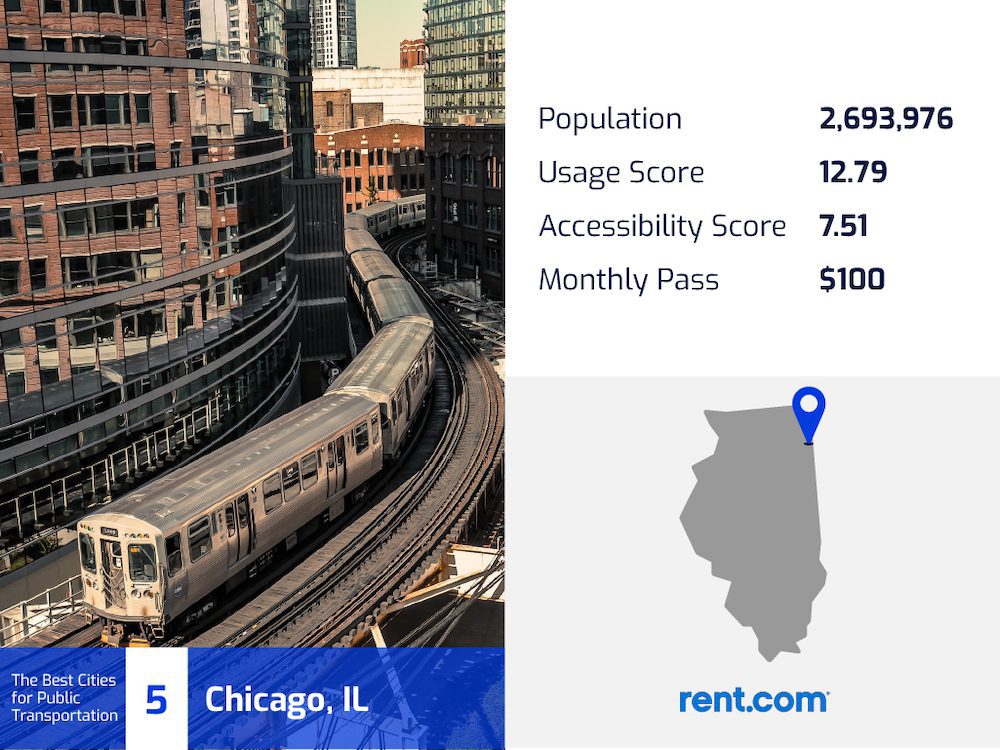 Even if you’ve never ridden it before, you’ve probably heard of âthe L.” Short for âelevated train,” locals and visitors alike love the L because it’s both cheap and easy to use. And here in a city with two airports, easy public transportation is key.

Take the L’s Blue Line to O’Hare International Airport (ORD) or the Orange Line to get to Chicago Midway International Airport (MDW). The Chicago Transit Authority also has an extensive bus system, while the Metra regional train system will take you through downtown Chicago and to the suburbs and cities beyond. Whether you’re looking to live large in a luxury apartment building, or you’re looking for a budget-conscious ‘hood, you’ll find a wide range of apartments in Chicago. 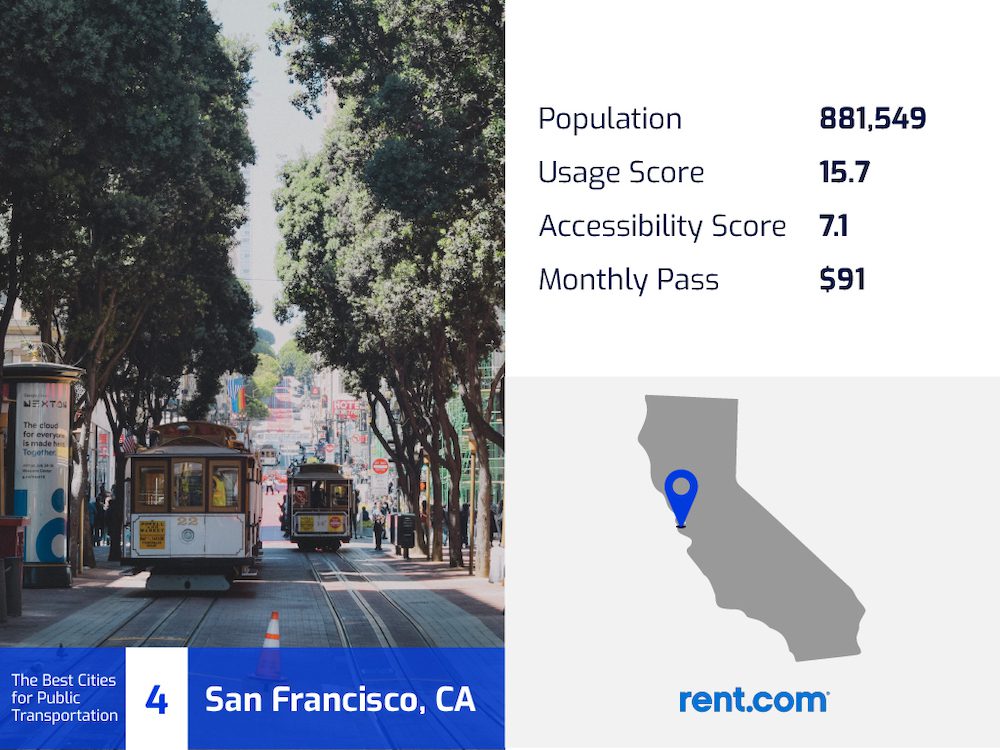 Here’s the thing about living in San Francisco. As far as cities go, it’s fairly compact, so nothing is too far away. Which makes it seem like you’ll probably be fine on foot. But there’s one huge consideration â the hills. Depending on how big your calf muscles are, and how hard you want them to work, you’re going to need to lean on public transportation at some point to cruise you up those inclines.

Fortunately, you can travel in style on the city’s iconic trolleys. Or, take the BART (Bay Area Rapid Transit), a rail system that will take you all around the Bay Area. If you’re staying in the city, MUNI has you covered with an extensive network of trains, buses and cable cars. If there’s one place you don’t need a car, it’s San Francisco. Plus, the city is expensive enough without paying for your own set of wheels. 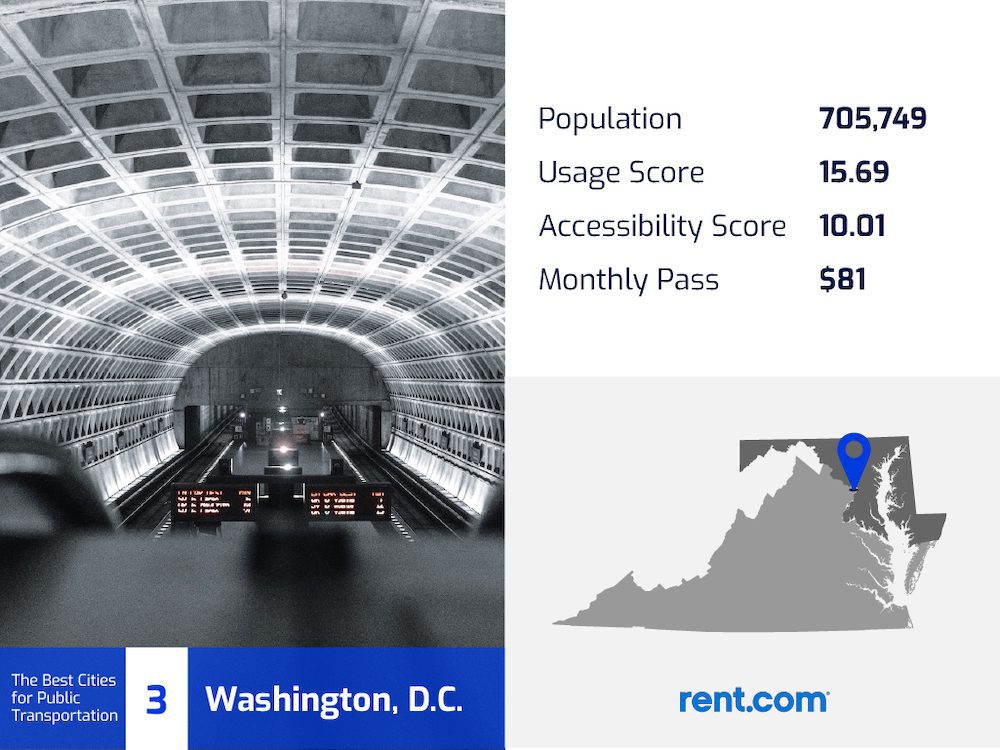 OK, let’s start with the bad news: Washington, D.C. is the third-most congested city in the country. Boo. But that’s exactly why you don’t want a car here, or really need one for that matter. The best way to escape road rage? On the subway. The Metrorail is the most efficient way to get around Washington, D.C. There’s also the Metrobus and the D.C. Circulator if you want to brave the roads â and prefer your public transportation with a bit of natural sunlight.

And since there are so many sights to see, even locals can appreciate the more tourist-oriented modes of transportation. Spend a sunny day on a boat ride across the Potomac, or hop on one of D.C.’s trolley tours to soak up the sights without stress. Fancy living in the nation’s capital? Take a quiz to find out which Washington, D.C., neighborhood is best for you. 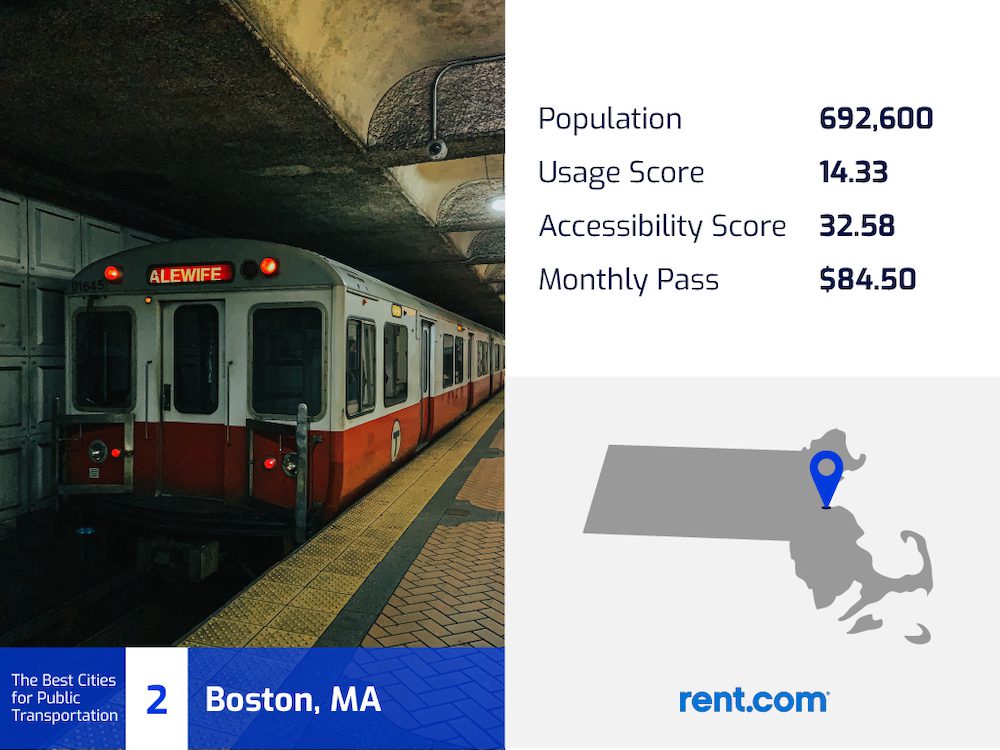 Beantown is an excellent city to traverse on foot. And when you’re not walking, you’re going to want to hop on the âT.” More formally known as the Massachusetts Bay Transportation Authority (MBTA), the five-line system has subways, trains, buses and trolleys that connect you to all of downtown Boston’s neighborhoods.

And who doesn’t love water taxis? Cruise across Boston Harbor on a boat and pat yourself on the back for avoiding some of the country’s worst traffic. Warming up to the idea of an East Coast move? Get up to speed on the cost of living in Boston, then find your perfect Boston apartment. 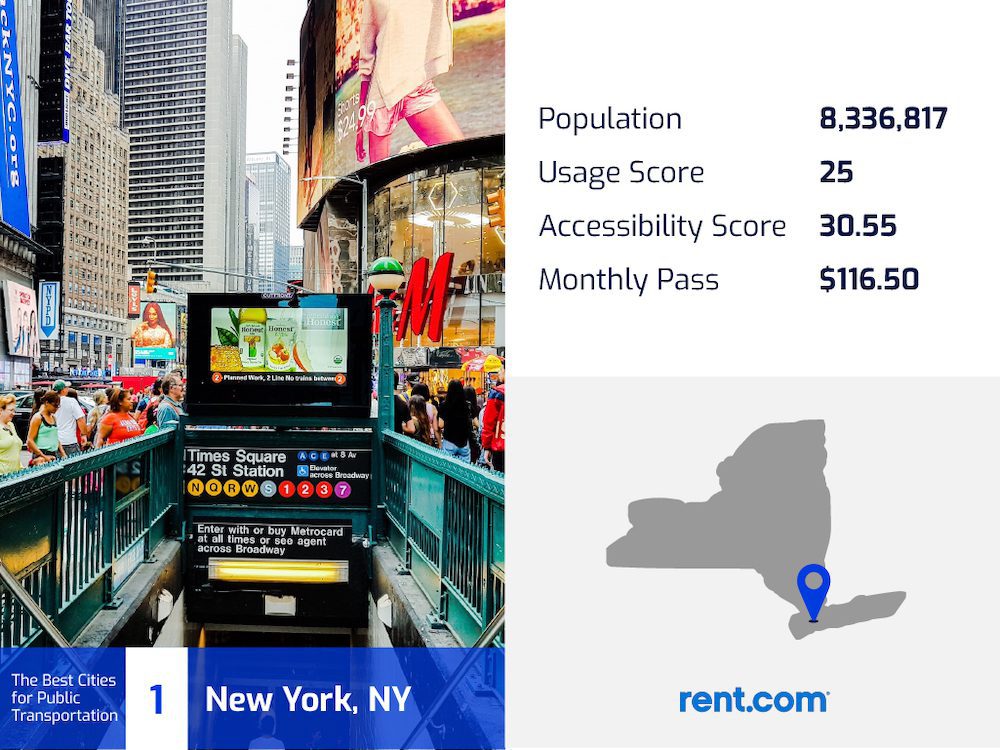 No surprise here, right? New York has long been the best city for public transportation in America. Of course, there are the iconic yellow taxis, but you simply can’t get much more connected than New York’s subway system. This impressive 24-hour network goes well beyond the city to shuttle commuters to both Long Island and New Jersey. With 1,148 train stations and 1,224 station lines, New York is untouchable when it comes to public transportation.

Having a car in N.Y.C. is not only near impossible (financially and otherwise), it’s simply not necessary. Put all of the energy you save in navigating the roads into your New York apartment search. It’s no secret that the Big Apple requires a big budget, and finding an affordable apartment is going to take some research. Start by figuring out which New York neighborhood is best for your lifestyle.

Features were normalized and then weighted based on the following scale:

Transit system info was from citylines.co. Transit cost was from ValuePenguin. Bus lines were from a database of 8 million commercially available business listings. These listings may not reflect recent changes to bus line availability. Usage is from the U.S. Census Bureau.

Rent prices are based on a rolling weighted average from Apartment Guide and Rent.com’s multifamily rental property inventory as of October 2021. Our team uses a weighted average formula that more accurately represents price availability for each unit type and reduces the influence of seasonality on rent prices in specific markets.

The rent information included in this article is used for illustrative purposes only. The data contained herein do not constitute financial advice or a pricing guarantee for any apartment.

The post The Best Cities for Public Transportation appeared first on The Rent.com Blog : A Renterâs Guide for Tips & Advice.

Can You Evict a Roommate Who’s on the Lease | ApartmentSearch 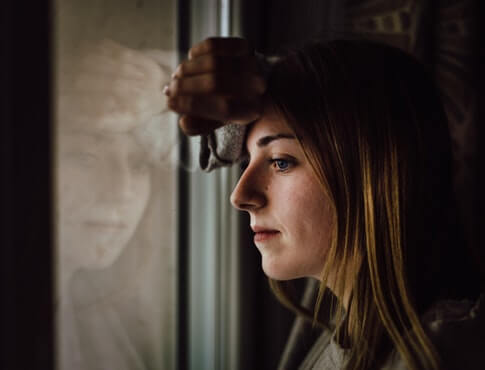 There are plenty of reasons to want to evict a roommate who's on the lease. But can it be done? If so, how? Learn what you can do about terrible roommates.